Dried Blood Analysis Being Trialed in Tokyo for Anti-Doping

AUGUST 2021 — According to a news item from Peit Kreuzer reporting in Germany for Deutschlandfunk, doping in sports is dominating the headlines as global sports agencies consider new and easier ways to screen athletes for prohibited drugs as part of a worldwide anti-doping effort.

In an online article titled “Blood Drop Analysis Is to be Tested in Tokyo,” Kreuzer reports that in May 2021, the Executive Committee of the World Anti-Doping Agency (WADA) approved a technical document for the use of finger-stick blood drop analysis for “Dried Blood Spot” testing. With this method, which would be used to either enhance or replace conventional venipuncture blood draws with a phlebotomist, it should be possible to use the blood drop analysis method routinely by the Winter Games in Beijing in 2022.

A Small Drop of Blood from the Fingertip 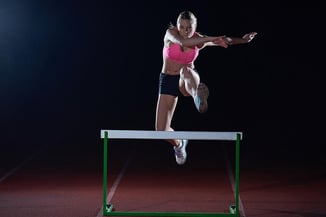 With the help of a small drop of blood and a measuring device, people with diabetes can determine the sugar (glucose) content of their blood. Using a similar method when screening athletes, in the near future it will be possible to sample a few small drops of blood to detect if they have been using prohibited substances.

A New Method for Anti-Doping Screening?

The World Anti-Doping Agency (WADA) believes in the potential of the new finger-stick blood sampling procedure. WADA President Witold Bańka has referred to this as “a very valuable addition to the test program with a view to dried blood analysis,” which is sometimes referred to as “DBS” for short after the English name, Dried Blood Spot test.

The Scientific Director of WADA, Olivier Rabin adds, “In Tokyo we will use blood drop analysis to better detect substances and then, if necessary, carry out additional analyses for detection. In the future, from Beijing and beyond, we will use DBS to convict fraudsters directly with the evidence."

A Small Lancet Is Enough

The finger-stick blood sampling method is pretty simple. Similar to a blood sugar test, a small lancet used to prick your finger or earlobe is enough to collect a few drops of blood on a credit card-sized piece of cellulose or filter paper.

It should be noted that WADA has approved the use of various different finger-stick devices and/or filter cards for use on a trial basis at the Tokyo Olympics. Whichever devices for dried blood sampling prove to have the greatest utility and accuracy will then be used at future sports events. DBS cards are one option.

According to Neoteryx, another option to be considered is the Mitra® device based on VAMS®, the company's volumetric microsampling technology. The VAMS microsampling approach uses a finger-prick with a lancet, but instead of smearing the blood drop onto a piece of filter paper, the blood drop is rapidly absorbed into the VAMS tip of the Mitra device. The VAMS tip helps to take the guesswork out of sample collection. How does the end-user know that the blood "microsample" is the right quantity and quality? Once the VAMS tip of the Mitra device goes fully red, the end-user is assured that the correct sample volume has been collected. In this way, Mitra devices enable anyone to easily collect the volume of blood needed for accurate analysis in a lab, thus overcoming problems with sample quantity and quality encountered with some other dried blood sampling methods.

Kreuzer reports in his news article that since the anti-doping inspector for the urine sample would already be present to monitor an athlete’s specimen collection process, adding a finger-prick blood test to the same sampling visit would only incur a slightly higher material cost.

"A key difference [with finger-prick] sampling, in contrast to conventional blood and urine controls, [is that it] can be done quickly, easily and with minimal stress on the athletes," says Professor Mario Thevis, the head of the Cologne doping control laboratory.

Thevis sees great advantages in this method, and adds, "In addition to the simplified sampling, further advantages of DBS are the stability of the substances to be tested in the dry state, the more cost-effective transport and the information on the quantities of active substances in the athletes' blood, which is particularly beneficial for substances that are only forbidden during competitions."

WADA Science Director Rabin even goes one step further, saying that It is now also easier to test unstable substances or to test more athletes worldwide.

“We want to promote this [dried blood testing approach] because many substances are more easily detectable in the blood than in the urine. And with the implementation of DBS, we can detect many substances better. Blood is a reactive matrix and is alive, [but when you put liquid blood in a test tube], it degrades over time. This makes it difficult to take samples in many parts of the world. Today we can take samples all over the world with dried blood."

The road to recognition of DBS as a viable method for anti-doping was very long. When Thomas Bach, President of the International Olympic Committee, announced the introduction of dry blood analysis in October 2019, it was the culmination of a long development process. He stated:

Blood Analysis Can Also Convict Dopers
Testosterone doping is a widespread and effective form of sports fraud. Women in particular have a good chance of getting away with the fraud because exogenous testosterone has not yet been detected in the urine.

The National Anti-Doping Organizations in Germany, Switzerland and the USA had already gained years of experience with dried blood collection and analysis. The story begins in the 1950s when DBS was used in a clinical setting (initially to test newborns for congenital diseases using heel-stick DBS blood sampling).

In anti-doping research, the DBS method wasn’t adopted until the early 2000s. By 2010, it was possible to detect numerous substance classes using DBS. But formal framework conditions must be in place for implementation in compliance with the regulations.

"A very complex job"
Olivier Rabin explains the principle of the A and B samples, as well as the sealed transport and storage options for the verification of validity. Rabin states, “We look for hundreds of substances in anti-doping tests. We have to validate hundreds of substances, a very complex job. That means we test different classes of substances, and we have to make sure that the analyses are good enough and sufficiently sensitive. [This is] so that the results are legally valid. And now we are entering a phase of routine analysis. Until now it was all just research."


This Newsroom post is curated content and was translated from the original German-language source. Any discrepancies in the English-language version from the German are the fault of this editor. For details in German, please refer to the original news here.

If you don’t find the information & assets you need via the buttons below, please contact us here: press@neoteryx.com