An article by Dala N. Daraghmeh et al in Australia, published in the July 2022 issue of Analytical and Bioanalytical Chemistry, reported on an investigation into relative levels of methotrexate and methotrexate polyglutamate in different blood matrices. The paper is entitled “Quantitation of methotrexate polyglutamates in human whole blood, erythrocytes and leukocytes collected via venepuncture and volumetric absorptive micro-sampling: a green LC–MS/MS-based method.” It describes a thorough investigation into the possibility of using whole blood sampling rather than plasma or washed red blood cells for remote therapeutic drug monitoring (TDM) of methotrexate. The group concluded that using whole blood, collected via either venipuncture or remote Mitra® devices based on VAMS® technology, could save time while maintaining accuracy for measuring methotrexate and its metabolites.

In 1948 Sidney Farber reported on the use of aminopterin, an amino derivative of folic acid, as an antineoplastic agent for the treatment of pediatric leukemia. During the ensuing years, it was noticed that the drug led to an interference in the proliferation of connective tissue. In 1951, a study showed improvements in patients with rheumatoid arthritis (RA), psoriasis and psoriatic arthritis [PSA) when they were given aminopterin. Due to issues with manufacturing, the drug was later modified with the addition of a methyl group.

The resultant drug, methotrexate (MTX), was approved by the US Food and Drug Administration (FDA) in 1953 for the treatment of a number of conditions, including acute lymphoblastic leukemia (in combination with other therapies). Several studies conducted in the ensuing years also showed positive results for those suffering from PSA and RA. As a result, in the 1980s, there was a widespread uptake in the use of MTX for treating diseases such as RA. There are several proposed mechanisms of action for MTX, including the inhibition of a number of enzymes, such as methylenetetrahydrofolate reductase, which can lead to an interference in DNA synthesis. 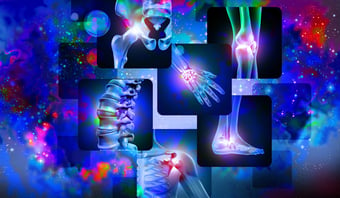 Rheumatoid Arthritis (RA) is an autoimmune disease which causes pain and swelling in joints, eventually leading to immobility. It was reported between 1980 and 2019 that the global prevalence of the disease was an average of 460 per 100,000 population.

Methotrexate taken in low doses is an effective treatment for many, but it has been reported that 40% of RA patients do not respond well and others suffer from adverse side effects. It has also been reported that plasma-based therapeutic drug monitoring (TDM), can be useful for determining patient adherence.

However, the half-life of MTX in plasma ranges from 4.5 to 10 hours, leading to challenges in reliably measuring the drug concentration. When MTX enters blood cells, it is enzymatically converted into five MTX-polyglutamate metabolites (MTX-PGs), some of which are more pharmacologically active than the parent compound and also have longer half-lives (weeks to months). As a result, MTX-PGs have the potential to be a more reliable MTX response marker.

The site of action for MTX-PGs is thought to be lymphocytes, found as part of peripheral blood mononuclear cells (PBMCs). However, MTX-PGs also accumulate in red blood cells (RBCs) and in these cells have shown to have a half-life of 120 days. As a result, RBCs have been considered surrogate cell types to measure MTX-PGs rather than PBMCs. However, it must be noted that MTX-PGs in RBCs may not be at the same concentration as found in lymphocytes, so may not be fully representative of the PBMC fraction.

Given that it is time consuming to prepare washed RBCs or isolate PBMCs for MTX-PG measurement, the research group conducting the study (summarized here) wanted to compare concentrations of MTX and MTX-PGs in plasma, RBCS, venous whole blood and capillary whole blood (dried Mitra samples). They hoped that measuring MTX and MTX-PGs in whole blood would simplify sample collection and analysis. They also hoped that using VAMS would allow for home sampling (as long as correlative data proved this in the study).

Conducting bridging studies between VAMs extracts vs. traditional plasma processing is always recommended to understand if related biases are seen. However, the distribution of drug and/or metabolites may also be different, dependent on the site of action. This study illustrates the importance of knowing the pharmacodynamic nature of drug and metabolites, especially when the drug target is found in the blood.

This article was summarized for our readers by James Rudge, PhD, Neoteryx Technical Director. This is curated content. To learn more about the important research outlined in this blog, visit the original article in Analytical and Bioanalytical Chemistry.