An article published by Ganesh S. Moorthy et al at Children's Hospital of Philadelphia (CHOP) in the November 2019 issue of Journal of Chromatography B reported on a thorough validation of three common carotenoids found in medical cannabis. The research study was conducted using Mitra® microsampling devices based on VAMS® technology. The paper is entitled “A patient-centric liquid chromatography-tandem mass spectrometry microsampling assay for analysis of cannabinoids in human whole blood: Application to pediatric pharmacokinetic study.” It describes the development and validation of delta-9-tetrahydrocannabinol (THC), cannabidiol (CBD), and cannabinol (CBN) extracted from dried blood samples on Mitra devices with VAMS® tips. Focusing on blood to plasma partitioning, the team was able to conclude that their findings were consistent with VAMS to plasma ratios for THC, CBD, and CBN. Their findings allowed them to demonstrate this as a proof-of-principle study for future patient-centric sampling projects involving cannabis.

The psychoactive effects of taking cannabis have long been known, but in recent years, cannabis has also been shown to have a wide number of pharmacological benefits in many diseases. For this reason, the medical community is applying cannabis to help manage certain conditions. For example, the National Health Service (NHS) in the United Kingdom can now prescribe medical cannabis for people with rare forms of epilepsy; for those experiencing nausea from chemotherapy medications; and those with muscle stiffness and spasms from Multiple Sclerosis (MS). However, it must be noted that cannabis is only considered when other treatments are not suitable or have not helped. Recently, medical cannabis has been shown to help with symptoms associated with autism spectrum disorders (ASD). A 2019 review published in the Nature Journal “Scientific Reports” stated that in the last three decades, there has been a threefold increase in ASD diagnoses. According to this review, “Cannabis in ASD patients appears to be a well-tolerated, safe and effective option to relieve symptoms associated with ASD.”

Object of the Pediatric Study

In 2017, a paper published by Protti et al, demonstrated the successful utilization of dried blood VAMS extracts for the analysis of natural and synthetic cannabinoids including THC. These findings led the research group at CHOP to look at the simultaneous quantitation of THC, CBD, and CBN from VAMS extracts for pediatric clinical trials involving both in-clinic and at-home sampling.

Understanding blood to plasma partitioning is a critical step in developing assays from whole blood VAMS extracts using Mitra devices. By understanding these levels, plasma equivalent values can be estimated, allowing for comparisons against plasma reference ranges. Given that many current therapeutic drug monitoring (TDM) assays measure analytes from wet plasma, such bridging studies as demonstrated by Moorthy et al are critical to allow for a transition to whole blood measurements and increase the scope for more patient sampling TDM research studies. 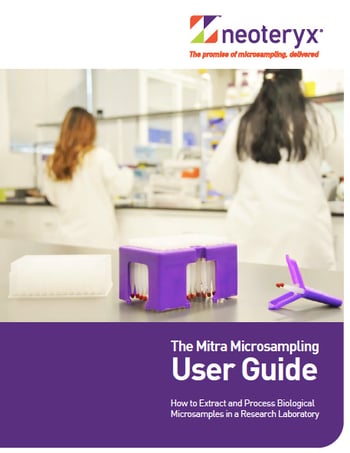