An article published by Iris Xie, Yang Xu and Kevin Bateman et al in the April 2018 issue of the Journal of Pharmaceutical and Biomedical Analysis, reported on the importance of developing robust extraction methods from samples collected with Mitra® devices to avoid extraction mediated biases. The paper is entitled “Extractability-mediated stability bias and hematocrit impact: High extraction recovery is critical to feasibility of volumetric adsorptive microsampling in regulated bioanalysis.” It describes the development and optimization of the extraction methodology for two small drug molecules, raltegravir and sitagliptin. Due to differences in the relative hydrophobicities of the two drugs, different extraction approaches were employed.

There are several biases to be considered when working with dried blood, teasing out and compensating for the different types of bias from dried blood spot (DBS) samples, including extraction related to hematocrit (HCT) bias. This was elegantly demonstrated in an earlier paper published in Analytical Chemistry (2013) by Paul Abu-Rabie et al.

When Mitra devices with VAMS® technology were launched in 2014, their volumetric approach to sample collection eliminated both spot migration and spot punch location biases that had been observed with DBS. Furthermore, it was demonstrated that Mitra devices could collect a fixed amount of blood independent of %HCT. As a result, when working with samples and standards in blood, only two main biases would need to be considered. The first bias to consider is from any matrix effects, and the second is HCT bias from a potentially incomplete extraction, which could also be affected by the age of the sample.

The paper by Xie, Xu and Bateman et al reviewed here highlighted an observation in the early Mitra-VAMS manuscripts that reported extraction biases for several analytes across a wide HCT range. Indeed, several manuscripts highlighted the importance of optimizing extraction methodology to minimize or eliminate this effect. The authors noted that a number of early studies reported an apparent compound instability over several days of storage. Although compound stability is always something to evaluate when developing analytical methods, it is known that many analytes are stable in dried blood, certainly in the medium term. 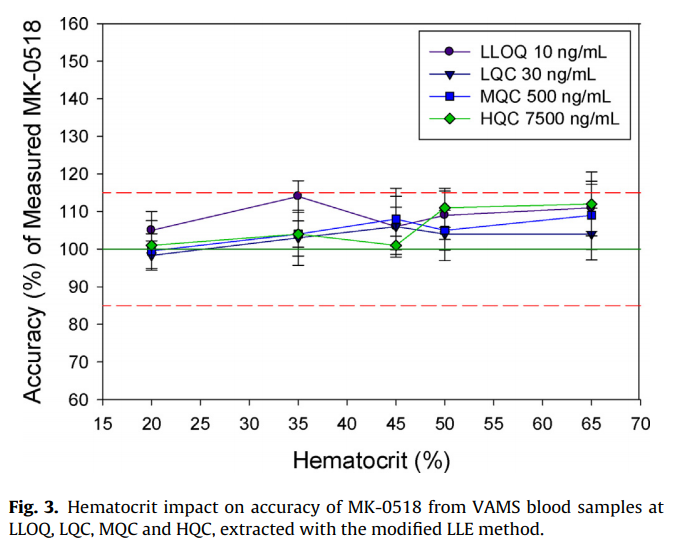 Xie, Xu and Bateman et al thus hypothesized that there could be a temporal bias factor to consider with dried blood, which could then be misinterpreted as instability for some compounds. They called it “extractability-mediated stability bias.” We will call it “temporal bias.” In short, temporal bias happens when blood ages and analytes become progressively entrapped in the dried hematocrit, leading to negative biases over time. The lower the extraction efficiency and the wider the %HCT range, the worse the bias becomes. The reason for this is still unknown, but we do know of many physicochemical changes when blood dries. One such change is that hemoglobin forms a dimer, which may contribute to this phenomenon. The good news is that we now know how to control for this by optimizing extraction methodology—a solution resulting from research conducted on this phenomenon, such as the work highlighted in this blog.

Object of the Study

The authors wanted to demonstrate that optimizing the extraction efficiency on dried samples and aged dried samples would help to mitigate both %HCT bias and the related temporal bias effect.

Dried blood is a complicated matrix where both the hematocrit content and age of the blood can cause issues with negative biases that can fail analytical validations. Exploration into different approaches to extraction methodology, is critical to maximizing extraction efficiency, leading to acceptable biases within validation guidelines. The work conducted by Iris Xie & Yang Xu et al showcased different extraction methodologies for two molecules that were analyzed by LC-MS/MS.

Developing robust assays using Mitra with VAMS is the key to success. However, in addition to optimizing extraction efficiency, there are a number of other considerations. These include choice of analytical platform as well as gaining insight into the very nature of the molecule(s) to be tested. To this end, Neoteryx has produced a comprehensive Mitra Microsampling User Guide that outlines the learnings from excellent papers like this by Xie, Xu & Bateman et al, as well as the experience Neoteryx has garnered since the launch of Mitra devices. 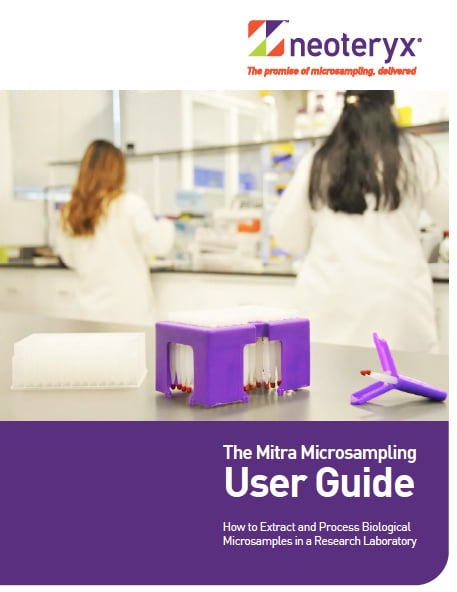