pk study of tacrolimus in rats: another VAMS success story 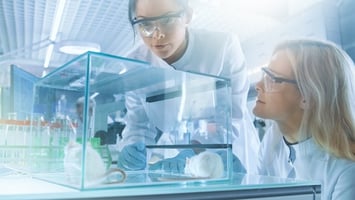 Volumetric absorptive microsampling has been hailed as a breakthrough in the world of medicine, having been ascertained as an effective way to collect small, precise and accurate volumes of blood (10 or 20 µL) regardless of the hematocrit. The sampling of biological fluids, especially whole blood on a porous hydrophilic tip, called a VAMS® tip, has also been made easier. Over the last two years, various therapeutic drug monitoring and pharmacokinetic studies have been conducted with Mitra devices and VAMS, thus giving more insight into the technology. More professionals are now utilizing Mitra devices to sample a smaller volume of blood from rodents, particularly in the preclinical setting.

PK Study of Tacrolimus in Rats

A study was conducted recently to evaluate the usefulness of Mitra® devices for microsampling in a rat pharmacokinetic study. It compared pharmacokinetic data including tacrolimus in rats and tacrolimus concentrations in plasma, wet blood, and dried blood on the VAMS tips of Mitra devices.

The researchers administered doses of tacrolimus to rats orally before using Mitra devices to obtain blood after predetermined time periods. Extraction of tacrolimus was done through sonication by mixing water and methanol while protein precipitation was used to quantify tacrolimus levels in plasma and wet blood.

Findings of the Study

The researchers determined that tacrolimus in VAMS apparatus beginning from 0.2 ng/mL was quantifiable if tandem mass spectrometer and high-performance liquid chromatography were to be used. Precision and accuracy of the results were within the set standards including the acceptance criteria. Bland-Altman plots also illustrated that tacrolimus concentrations in wet blood was no more than that in Mitra devices irrespective of the tacrolimus levels.

Tacrolimus levels in plasma somehow differed from those in Mitra devices, particularly where lower concentrations were applied. This result was attributed to the partition of tacrolimus to blood cells. Nevertheless, pharmacokinetic parameters were comparable among all the three matrices.

Mitra Devices with VAMS and PK Studies in Rats

The results of the study suggest that Mira devices with VAMS can be instrumental in blood sampling lab animals and pharmacokinetic studies in rats. These devices can also be recommended in studying other drugs and can help reduce the sample size (number of rats).

The science of microsampling is finding its place in pharmacokinetic evaluations and has made blood sampling lab animals much easier.