An article published in the March 2018 issue of the Journal of Diabetes Science and Technology, reported on the use of blood microsamples to measure C-peptide as a biomarker for the differentiation of type 1 versus type 2 diabetes. The paper, entitled “Microsampling Collection Methods for Measurement of C-peptide in Whole Blood,” describes a pilot study that involved collecting blood using three different methods: capillary tubes, dried blood spot (DBS) and volumetric absorptive microsampling. The blood collected with capillary tubes was centrifuged for plasma samples. Simultaneously, samples were collected using DBS cards and Mitra® devices with VAMS® technology.

Blood from both types of microsamplers was extracted prior to assaying for C-peptide alongside the corresponding plasma samples. The researchers analyzed plasma levels from harvested plasma to plasma equivalent levels of the peptide from VAMS and DBS on two immunoassay platforms. The research team, members of the Diabetes Research Unit at Swansea University in the United Kingdom, demonstrated that reliable values could be obtained from both microsampling methods, though they found that VAMS provided more reliable results compared to DBS. 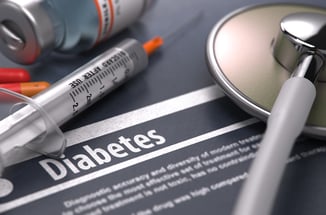 As recently reported by the BBC Scotland is rolling out a C-peptide blood test to monitor insulin production in newly diagnosed type 1 diabetics for the first three years. The purpose of this is to determine if the pancreas of diabetic patients is still secreting insulin (the hormone responsible for reducing blood glucose levels).

A Primer on the Two Types of Diabetes

There are a primarily two of types of diabetes. The first is type 1, where the insulin secreting beta-cells of the islets of Langerhans, found in the pancreas, are attacked through an autoimmune process. The reason for this is not fully understood but may involve microbiome dysbiosis or persistent enteroviral infections. Subsequent loss of insulin production leads to raised blood glucose levels, which can lead to weight loss and death from malnutrition (as well as other reported complications).

The second is type 2 diabetes, which is linked to an unhealthy lifestyle where a lack of exercise, obesity and a diet rich in refined carbohydrates causes insulin resistance that leads to raised blood glucose levels. Type 2 diabetes can often be controlled by diet, exercise and medication such as metformin, which acts to stimulate insulin production and efficacy.

Diabetes Treatments
The most popular treatment for type 1 diabetes are insulin injections, but these can be difficult to manage. If proper insulin dosing isn’t carefully monitored and controlled, there is a risk that too much insulin can trigger hypoglycemic episodes, which can be life-threatening. Furthermore, too little insulin can lead to hyperglycemia which can lead to complications, such as diabetic kidney disease and increased morbidity.

Diabetes Diagnosis
Diagnosis of diabetes involves measurement of glucose resistance and elevation of the long-term diabetic marker glycosylated hemoglobin (HbA1c), which we have previously reported on. Neither approach to a diabetic diagnosis clearly discerns the classification of the disease. However, measurement of C-peptide can help with monitoring insulin production.

Understanding Insulin Production and the Role of C-peptide

When the pancreas is stimulated to secrete insulin due to an increase in serum glucose -- often as a result of a meal -- the pancreas first synthesizes a peptide called proinsulin, which is made up of insulin and C-peptide. The final stage of insulin production and release is enzymatic cleavage of proinsulin into the two subunits. Insulin is a transient hormone. Its ½ life is approximately 2-3 minutes. In part, it is metabolized by fast pass metabolism in the liver. However, the physiologically inactive C-peptide fragment has a ½ life of 20-30 minutes (excreted by the kidney), making it a more stable predicate biomarker for insulin production.

As a result, C-peptide is an ideal biomarker for monitoring pancreatic activity. It can help to discern the difference between type 1 and 2 diabetes. Moreover, the C-peptide approach can also monitor pancreatic activity, even in the presence of administered insulin. This is because injected insulin is given as pure insulin and not as proinsulin. This makes monitoring the pancreatic activity of insulin-dependent diabetes possible. In fact, recent guidelines developed by the American Association of Clinical Endocrinologists (AACE) and the American College of Endocrinology (ACE), recommend that C-peptide levels should be documented when there is doubt over the diagnosis of T1 or T2 diabetes.

Challenges in Testing for C-peptide

Current tests for C-peptide involve 24-hour urine collection or measurement of urinary C-peptide creatine ratio. Both tests are less than ideal. Further, the choice of test is also dependent on the sex of the individual. Measurement of serum C-peptide levels is problematic due to proteolytic cleavage of the protein. However, C-peptide measured from whole EDTA blood (from harvested plasma) has been reported to be stable for 24 hours. Blood sampling may be a better option than urine sampling but collecting and transporting venous blood can also be challenging.

Given the drawbacks with collecting and transporting venous samples as well as the logistical problems with 24-hour urine collection, access to an easy blood collection alternative and a dried blood assay for diabetes research would be ideal.  It has been highlighted in the paper from Swansea University that C-peptide is stable from dried blood samples collected via DBS for more than seven days at room temperature. Furthermore, a previous paper showed that the peptide remained stable for 6 months. For these reasons, the team at Swansea University compared extracts from Mitra® devices with VAMS® to extracts from conventional DBS to see if there was an added benefit to analyzing volumetrically collected samples.

This study demonstrates the important role that microsampling can play in the remote monitoring of biomarkers such as C-peptide for research on conditions like diabetes.  The more that remote microsampling can be applied to keep diabetic patients safe at home, the more we can limit unnecessary exposure to contagious viruses while also providing crucial data for study endpoints.

This study paper was summarized for our readers by James Rudge, PhD, Neoteryx Technical Director. This is curated content. To learn more about the important research outlined in this review, visit the original article published in Journal of Diabetes Science and Technology.