heavy metal toxicity and heavy metal exposure testing: what you should know

While the body needs a small number of heavy metals (zinc, manganese, copper, iron, chromium), buildups of certain metals can be harmful. Such accumulation is known as “heavy metal poisoning” and can be toxic to the body. Here we explore who is vulnerable to heavy metal toxicity and what is involved with heavy metal exposure testing.

What are Heavy Metals?

Heavy metals are naturally occurring elements found on the earth and used in modern-day applications, including medicine, agriculture, and manufacturing. They include lead, arsenic, mercury, cadmium, and cobalt. Humans can be exposed to high concentrations of these metals from air or water pollution, medicine, food, and industrial processes, to mention a few.

An accumulation of some heavy metals is toxic, because the metals react with the human body's systems, causing health problems that can range from nervous system dysfunction to gastrointestinal problems. High amounts of arsenic, for example, inhibit the function of a variety of enzymes. Arsenic poisoning can manifest in the form of a brain hemorrhage, muscle aches, seizures, hardening of the skin, bloody diarrhea, and vomiting.

Other metals, such as lead, mimic the molecular composition of calcium, causing enzymes and protein channels that use the nutrient to malfunction as the metal accumulates in the body. High amounts of lead in the body cause various neurological problems, including seizures, confusion, and headaches. Lead is particularly harmful to young children whose brains are still developing.

Lead can be found in many industries and products. This metal negatively affects children that are exposed to it via paint, especially older paint found in old school buildings and houses. The kids may ingest or chew the paint chips, leading to heavy metal poisoning. In the United States, lead poisoning usually affects kids aged 1-3 years.

The researchers found that once the metal in the device wears down, the cobalt is released into the bloodstream, causing toxicity. Patients exhibited symptoms, such as:

The findings prompted the US Food and Drug Administration to recommend follow-ups on asymptomatic hip-replacement patients by performing routine radiographs and physical examinations.

How a Heavy Metal Toxicity Blood Test Can Help

A heavy metal toxicity blood test can reveal heavy metal poisoning. The test determines the level of potentially harmful metals (arsenic, lead, mercury, and cadmium) in the blood. Screening for heavy metal toxicity may also include gathering occupational, dietary, and recreational histories to identify the source of exposure.

How the Heavy Metal Toxicity Test is Performed

The emergence of less invasive specimen collection methods like volumetric absorptive microsampling (VAMS®) with a Mitra® device makes it easier to collect samples for heavy metal blood testing. VAMS technology works with portable Mitra devices that use a simple finger-stick technique, allowing for easy specimen collection at the workplace or remote specimen collection at home. With remote collection, the individual uses a remote health kit like the Mitra® Blood Collection Kit to collect their own sample at home. The samples are mailed to the lab for analysis, and the healthcare team can follow up to provide test results. Some health and wellness companies are also selling home health kits for heavy metal testing that people can purchase independently to get screened for heavy metal exposure on their own.

VAMS has proved to be a reliable method for research studies of heavy metal toxicity, as was shown in a study to determine cobalt toxicity in metal-on-metal prosthesis patients. The sample collection method and extraction procedure provided accurate results independent of the age of the VAMS samples. Due to the ease and simplicity of using remote, portable specimen collection options for studies in heavy metal testing, future screenings of employees in high-risk work settings or vulnerable patient populations also may leverage kits that include Mitra with VAMS technology. 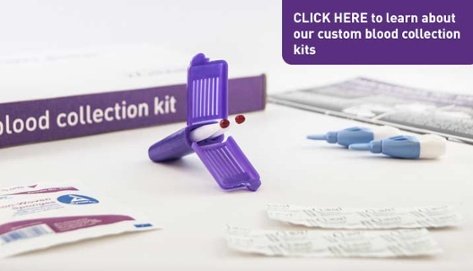