a history of the VAMS concept

In 2014, Neoteryx was spun off from its parent company, Phenomenex, to develop, manufacture, and sell Mitra® microsampling devices, based on Volumetric Absorptive Microsampling (VAMS™) technology. For the first time, Microsampling Specialist Dr. James B. Rudge shares the full story of how this breakthrough came to be.

In 2008, while I was still working at Phenomenex, I attended the 30th BMSS meeting in York. During this meeting, I met with my friend Dr. Neil Spooner, who was working at GlaxoSmithKline in Ware, leading a team in the DMPK department looking at new technologies.

Neil’s focus at the time was developing quantitative PK studies from DBS cards. He mentioned that, although DBS showed great promise as a microsampling technique - ease of transport was a huge benefit to them - the technique had some technical limitations. One of these was the volumetric hematocrit bias, and the second was controlling the volume added to the cards. The way they overcame this was to volumetrically collect blood via a fixed volume capillary and carefully spot this onto a DBS card.

This was when the idea of VAMS dawned on me.

My father is diabetic and tests his blood sugars using test strips, which take up a microsample of blood and are analysed using a point of care device. Talking to Neil, I wondered aloud whether something could be developed for DBS where the device is easy to collect blood from and has, like a capillary, a volumetric component to it, while retraining all the other value drivers of DBS. Neil said that this sounded like a neat idea, so I decided to develop some concepts at home.

The first prototype I looked at involved taking DBS paper and fixing it in a holder. The idea of this was to apply the sampler to the blood and allow it to collect laterally. 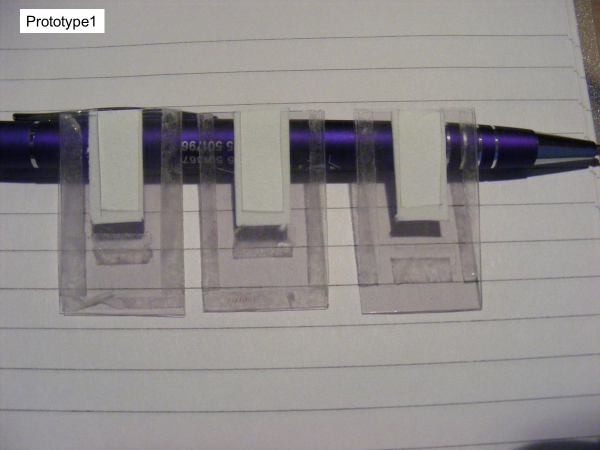 This proved to take up the blood too slowly. When I showed it to Neil and his colleague Phil Denniff, they said that they would prefer to see DBS paper covered in some way.

The next concept was designed to build in a retractable functionality. It had a wedge-shaped design to the end to see if the flow of blood would stop at the tapered edge. 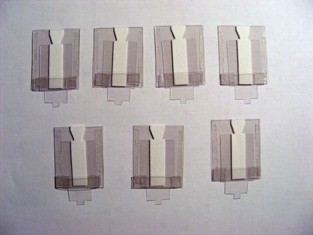 This was tested by Neil and Phil, and it worked! But, again, blood flow was too slow.

One of the issues associated with the concepts I had thought about so far was that there was no automation element to the design. Pondering this, I realized that if I mounted a small amount of paper on the end of a pipette tip, this sampler could be easily automated. My first attempt at doing this was to adapt a positive displacement pipettor with a post punch of a DBS disk mounted on the piston (see below). 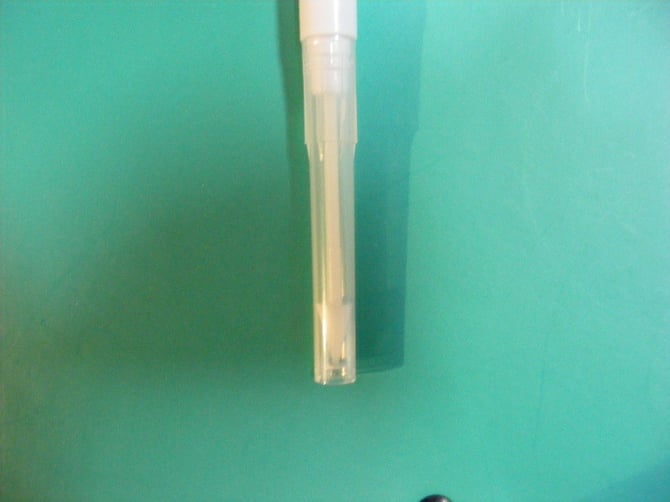 I felt that, although this would be an elegant design for the product, it was likely to be costly. So, I came up with the idea of mount paper triangles onto standard pipette tips (see here).

Shown here are 36 samplers I took to GSK for testing. At the Ware site, we looked to see if they absorbed a fixed volume of blood independent of haematocrit. We did some extraction studies too. The results indeed indicated that these samplers had a volumetric component, and bias results showed that, rather than positive bias with respect to increasing hematocrit as observed for DBS, these showed a negative bias. It was hypothesized that this was due to haematocrit-dependent extraction bias, which could be solved with the right extraction conditions.

Neil encouraged me to present this idea to Phenomenex, as this concept had the potential to solve so many of the issues seen with DBS. How little we knew then!

A trip to the US - and the rest is history!

In 2010, equipped with a presentation and prototypes, I journeyed to California to meet with the management team at Phenomenex to show my blood sampler concept. Because of this, Phenomenex R&D were instructed by Fasha Majoor (CEO and owner - 1982-2016) to begin making the idea a reality.

From 2010-2014, development of the VAMS technique progressed. During this time, Phenomenex and GSK kept in close contact to show data and designs - we have a huge debt of gratitude to Neil, Phil, and the team at the time for their valuable input and testing of prototypes.

Finally, in 2014, the device was a reality and a sister company to Phenomenex, called Neoteryx, was born. The device was launched at the ASMS meeting of that year. Since this time, Neoteryx has grown from strength to strength into a leading global player in microsampling market with many customers having deployed assays on the technology.

Since the pioneering days of the VAMS technique, I’ve remained great friends with Neil and Phil, and it seems only fitting to let Neil says the final words.

"The development of the Neoteryx blood sampler is a wonderful example of how you should never give up on an important issue, and how networking and honest conversations can solve difficult problems. Many observers thought that the DBS hematocrit and homogeneity issues were the end of the line for all the hopes we had invested in this novel approach and the tangible benefits it would deliver for high quality quantitative bioanalysis, patients and animal use. However, we knew there must be a solution to the challenge. We kept on talking. We kept on theorising. We kept on dreaming. We kept on supporting and sharing. We kept on experimenting. The result?  People listened. People got motivated. People invested time and money, and delivered a viable workable solution. How wonderful is that?"  - Neil Spooner January 2018 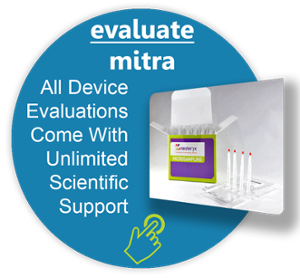