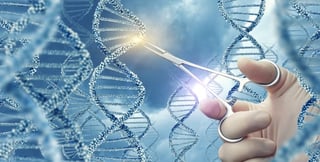 Recent technological advancements in the realm of gene editing will give humanity the power to manipulate the very stuff of life.

First characterized by Francisco Mojica in 1993, CRISPR stands for Clustered Regularly Interspaced Short Palindromic Repeats, one part of the bacterial immune system. The other two pieces of this unique gene-editing puzzle are genes that encode CRISPR-associated proteins (Cas) and specific bits of viral DNA that act as an in-vivo database of the previously encountered pathogens between the palindromic sequences.

An encounter with a “known” virus activates Cas genes, initiating the translation of viral spacers into specific, guiding RNAs (crRNAs) that are taken up by Cas enzymes. When crRNA-Cas complex encounters matching viral DNA (some Cas systems target RNA), it prevents replication of the invading pathogen by precisely slicing its genome. Modified for use in nonbacterial systems, CRISPR-Cas provides a powerful tool in gene therapy research.

Why All the Hype?

Unlike “simpler” enzyme systems commonly used in molecular biology, CRISPR-Cas can recognize DNA sequences of about 20 bases. With a specific target sequence and guide RNA designed in a matter of days, the system can be tailored to a specific gene, without the fear of the enzyme slicing up the entire genome.

Sophisticated genome engineering techniques, such as zinc finger nuclease (ZFN) and transcription activator-like effector nucleases (TALENs), have, in theory, better specificity than CRISPR-Cas. However, both techniques require custom-designed proteins, with multiple variations of protein unlikely to function. In comparison, it is much easier (and faster) to create a working guide RNA sequence.

An overwhelming majority of biomedical research is done on mice with altered or disabled genes. With traditional means, a new line of genetically modified mice takes at least three generations and over a year (for each altered gene) to develop. However, with the use of CRISPR-Cas the same genetic line can be achieved in one generation, saving time, money, and animal lives, especially when paired with other techniques that support the Three Rs of animal welfare.

The system also shows unparalleled flexibility. It allows not only modification of multiple genes in mice at the same time, circumventing the daunting, three-generation process for each gene, but also genome modification in virtually any living organism.

DNA/RNA is a hot topic in human health. And with the first ever approval of gene editing on human embryos in February 2016, everyone is talking about CRISPR because it has the potential to alter not just us but the entire world and its ecosystems.